A Windows system frequently exhibits sluggish performance and latency in system functionality when a lot of data is created, edited, or moved on it. We defrag Windows 10 or older versions in order to maintain a file system on a Windows computer. The level of file system fragmentation is decreased by using the best disk defragmentation software. In order to save files in the smallest possible pieces, this procedure physically arranges the mass storage device’s content.

The most effective file optimization is achieved via disk defragmentation, which also significantly increases disk space. Effective may enhance system performance in general and speed up your computer. This post is for you if you don’t know how to defragment Windows 10, 8, or 7. We’re going to list the top Windows disk defragmentation software in this article.

Why Do We Need To Defrag Hard Drive?

To put it succinctly, “Defragging your hard disk frequently can speed up your computer and lengthen its lifespan too.” You can think about this as cleaning the inside of your PCs or servers, to use layman’s terminology. All of the data fragments that are dispersed across your hard drive are assembled in a tidy, orderly, and appropriate structure during this process.

Factors You Should Consider While Choosing The Best Software

Before buying the Best Defrag Software to utilize in 2022, make sure to heed the following crucial advice and recommendations.

For some people, manually doing defragmentation can be a laborious operation. Therefore, selecting the best defrag software that can assist you in automating the entire process within a user-friendly interface is crucial.

Not all disk defragmentation programs are created to function correctly on all operating system versions. Check a program’s compatibility list before spending money on it, and if it runs on your OS, think about buying it.

Select a reputable program that offers the Scheduler tool and enables you to schedule the defragging procedure to run every day, every week, or every month. As a result, you won’t need to worry about managing this process yourself because the software will handle it for you.

4. Ability To Run In The Background

Select only applications that are functional and discreetly run in the background. This will guarantee that you can use the instrument without interruption while working in peace. Invest in this software that can operate automatically when the computer boots.

However, there are a few free disk defragmentation programs on the market that can help you maximize your storage space and accelerate performance. However, you should think about using products like Disk Speedup, Smart Defrag, etc. if you have the money to spend a few dollars for the premium version to benefit from more features, efficiency, speed, and more.

For your computer to be optimized and boosted so it feels as good as new, check out our list of the Best Software for Windows 10, 8, 7, and other versions!

A multi-utility program called Disk Speedup for Windows can defragment hard drives, clear away rubbish, fix file system problems, and extend the life of your hard disk. It ranked as the finest defrag software in our roundup thanks to its user-friendly features. Both the 32-bit and 64-bit versions of this software are compatible with the Windows 10/8.1/8/7/Vista, XP, and operating systems.

Top disk software O&O Defrag is well-organized and simple to use. It provides fantastic functions like optimizing a hard disk, inspecting a drive for problems, and displaying a list of all the fragmented files, among others, thanks to its user-friendly interface. It offers scheduled that can be configured to not take place if fragmentation is not actually necessary. 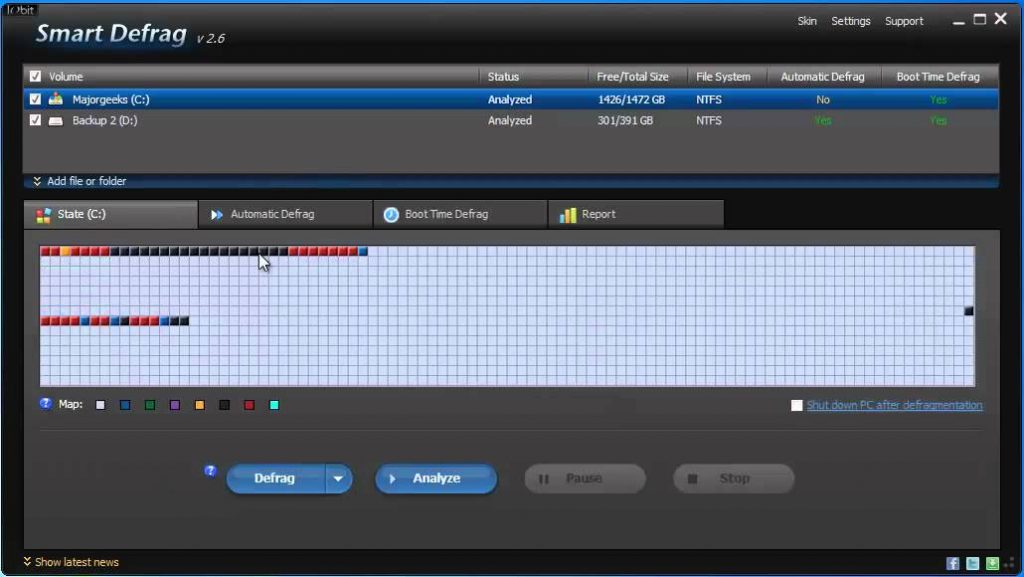 This is once again one of the Best Defragment software options if you’re looking for a fashionable application to manage Disk Defragmenter on your hard drive. One of the top defrag applications for Windows OS, IObit Smart Defrag offers a few new tactics to speed up the operation. In our list of the top 5 disk defragmenters, Amigabit Disk Defrag is ranked fourth. Junk files and other transient unneeded files are stored on your hard drive every time you use your computer. Your computer may run slowly as a result of this gathered data. You can automatically examine, defragment, and optimize disks using the Amigabit Disk Defrag utility for maximum performance.

One of the greatest and most effective tools is Disk SpeedUp, which can be used to defragment both entire hard drives and specific files and folders. Although this product has an outdated appearance, it effectively defragments the hard drive. Even though it lacks some of the more sophisticated functions, it is still useful for simple defragmentation.

One of Piriform’s greatest defragging programs is called CCleaner Defraggler. Piriform also made the most popular optimization program in the world, called CCleaner. You can defragment the files on your computer’s hard drive using Defraggler. Your system’s performance is greatly enhanced. This utility can defrag precisely what you need, and it arranges vacant disk space to further reduce fragmentation. It also indicates empty blocks and unfragmented blocks. 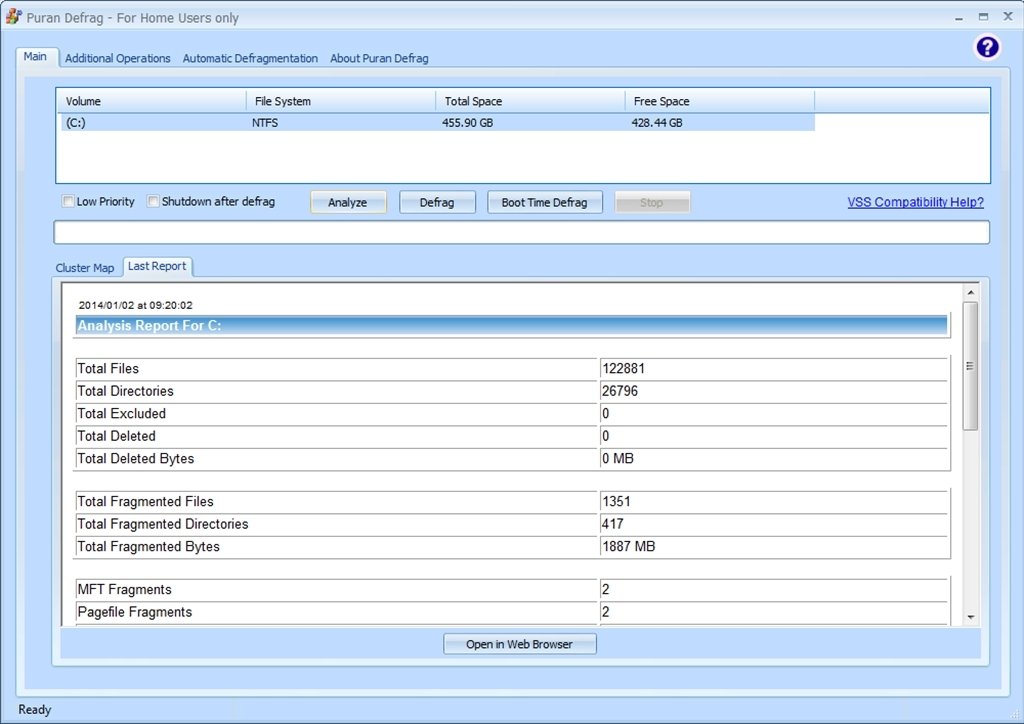 PIOZR often referred to as Puran Defrag, is a cutting-edge technology that will help your computer run more quickly than ever. It is built on the straightforward tenet that the files that are used the most should be kept in locations that are easy to get to. PIOZR accelerates the system speed by moving frequently used files to faster disk regions on the outer edge. 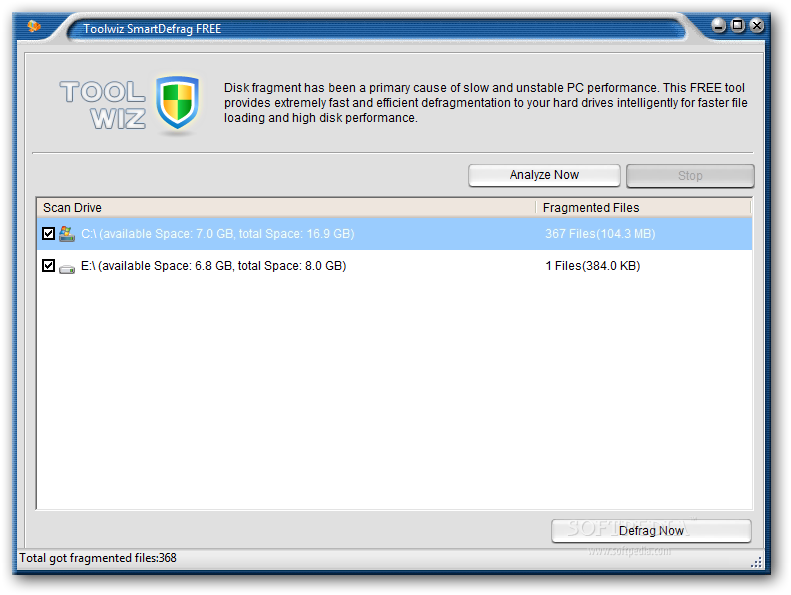 Toolwiz Smart Defrag is a very small, user-friendly program that scans the disk, eliminates fragments, and speeds up file access. Whether they are internal or external hard drives or other storage drives, this utility can analyze every drive attached to your system. For a better understanding of disk utilization, it also shows a thorough study of the drive. The performance and speed of the PC, which is unavoidably impacted by time, will unquestionably increase with the daily use of this application.

One of the first, most reliable, and top disk defragmenter programs is MyDefrag, which works with Windows 7 and prior versions. Although a few features are not OS compatible, it still functions with Windows 10 and Windows 8. For Windows Server 2008 and 2003, it is a reliable and little piece of software. This disk defragmenter can be used on several hard drives. Through Task Scheduler, you can plan optimization for setup or for a later time. 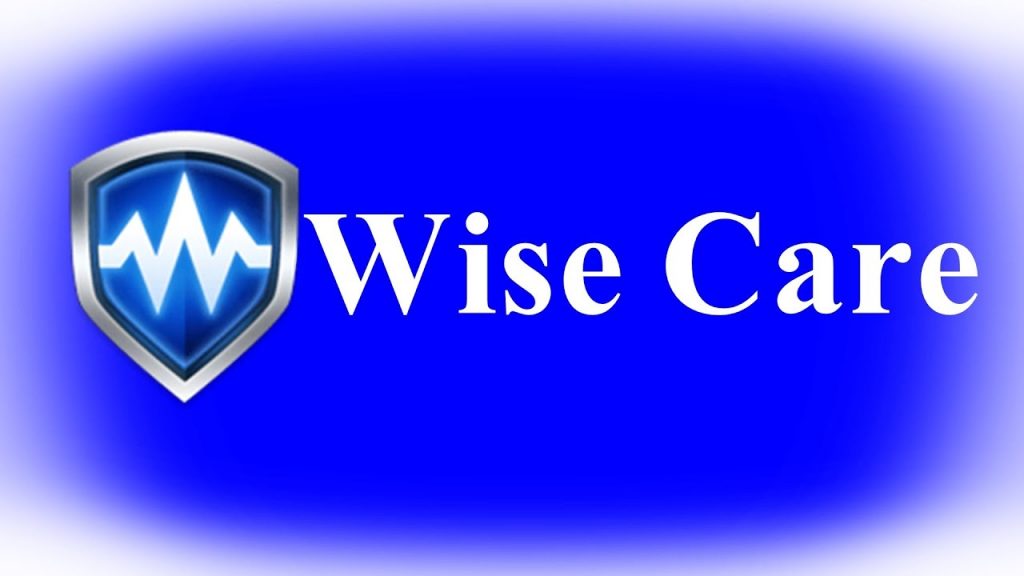 Wise Care 365 has been included in our list of the Best Disk Defragmenter Tools for Windows 10 & Other Versions. The tool is a great option for new users and has a ton of functions that make the process of system optimization simple. It also has tools for auto-cleaning (log files, temporary files, garbage, surfing history, and other residuals), correcting broken registry entries, RAM optimization, file shredding, and many other things in addition to disk defragmentation. Some of the Wise Care 365 tools can also be used via the right-click context menu.

With a variety of options for repairing, defragging, and optimizing disks, UltraDefrag is the best defragmenter program for both novice and experienced PC users. It even has a special module that can immediately scan a hard disk for typical faults and fix them. UltraDefrag allows defragging for both internal and external hard drives, much as the majority of the Disk Defragmenter Software for Windows. In reality, in addition to defragmenting the entire HDD, it also allows you to do so for specific files and folders.

Another top disk defragmenter program available is Diskeeper by Condusiv, which maintains your hard drive defragmented in real-time. The program has a simple user interface and simple navigational tools, and it runs in the background. Through the defragmentation process, Diskeeper is renowned for greatly enhancing system performance. It even assists users in safely locating and removing resource-intensive file fragmentation. 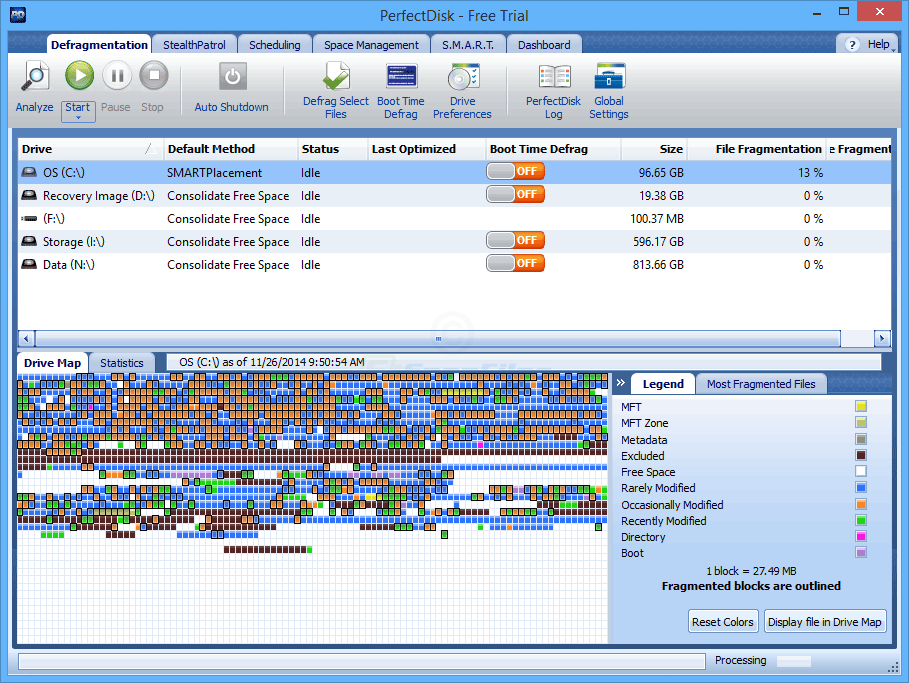 On our list of the Best DSoftware, PerfectDisk is yet another outstanding program. The app has an interesting set of functions despite having a dated-looking interface. A versatile and adaptable piece of software, PerfectDisk Defragmenter. Defragmentation can be simply scheduled to meet your preferences. By automatically identifying and removing all duplicate files on the system, the software also aids in recovering disk space.

This app is very unique. It was intended to be a fragmentation tool rather than a defragmentation tool in its primary function. When testing the effectiveness of other defragmentation utility software, this tool is frequently used to manually fragment the individual files or disks. PassMark can display the currently fragmented file graphically for our needs. Additionally, it enables the viewing of comprehensive file-specific information. The utility makes it simple to defragment the drive or file.

Q1. Why Defrag your Hard Drive?

Using specialized defragmentation software can undoubtedly speed up a computer that has a fragmented hard drive, which impacts system performance and slows it down. Using the utility, you may speed up Windows 10/8.1/8/7 and optimize the Hard Drive and RAM for optimum Operating System performance.

Streamlining the data fragmentation on your hard drive is the aim of the disk defragmentation procedure. Each time you save a file, your hard drive allocates space for it. Any time you edit or modify a file, such modifications can prevent the file from occupying the same designated space.

When the system is idle, one should always run an operation. Several variables, like the size of the hard drive, the amount of data stored, the system resources (RAM + processor), and the number of fragmented files on the hard drive, can affect how long the defragmentation process takes.

As a result, you can start the procedure late at night or early in the morning once all the applications have been submitted.

You now have the choice to select the top defrag software for Windows 10 from the list above after we reviewed a handful of the best disk defragmentation programs. If you are an expert and can start the procedure using Windows utilities and adhere to the directions, you may be able to forego using a third-party utility. It is advised to have any of the applications on the list above for a simple approach with lots of extra possibilities.