How Strong is Naruto Without Kurama in Boruto?

Since he was a youngster, Naruto has had Kurama, and the tailed beast is a part of his ability. However, many people are wondering how strong Naruto is now that Kurama has died. Kurama is largely responsible for Naruto’s tremendous strength. While he took the time to build a relationship with the tailed beast and gain his trust, the latter’s chakra is not his. Despite what many people believe, Naruto is quite powerful even without Kurama.

Naruto is skilled in taijutsu and ninjutsu in general as a result of his dedication since infancy. He has the ability to summon extremely destructive Rasengans, as well as a Rasenshuriken. Furthermore, Naruto is virtually completely unparalleled in Sage Mode.

Even without Kurama, Naruto is a high-level Kage who can easily defeat any of the five village chiefs in a fight. At the very least, his abilities are comparable to Minato’s or perhaps Itachi’s. While Naruto is still powerful without Kurama, his death has surely resulted in a significant power loss.

Naruto without Kurama vs. Sasuke without Sharingan! 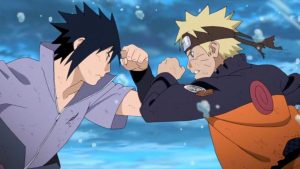 People, for some reason, enjoy comparing characters, especially those from the same series, and it’s fun to create controlled circumstances in which the two square off.

Following the death of Kurama, many fans have speculated on who would win in a fight: Sasuke without Sharingan or Naruto without Kurama. While this combat will not be equal in any way, it will be exciting nonetheless because Sharingan is a Kekkei Genkai. So, without further ado, let’s begin the versus bouts!

Naruto can still employ his shadow clones and other strong techniques like Rasengan, Rasenshuriken, and Sage Mode even without Kurama. He also possesses a lot of chakra reserves, a lot of stamina, and a lot of resilience as an Uzumaki.

While it is true that without Kurama’s chakra, Naruto’s ability to use these Jutsus would be severely limited, his capacity is larger than Sasuke’s. This isn’t even taking into account Naruto’s ability to summon enormous Toads, which would significantly improve his fighting abilities.

Sasuke, on the other hand, is greatly hampered without Sharingan, his main Kekkei Genkai. As a result, his only weapon will be Chidori, which will lose its precision once more without Sharingan.

Sasuke will also be unable to deal with Naruto’s shadow clones without his eye prowess. And the reality remains that Sasuke trusts his Sharingan more than Naruto trusts Kurama. It makes sense given that the dojutsu is a portion of his own might. However, without it, Sasuke will be unable to use his most powerful techniques, Amaterasu and Susanoo. You can see due to its heavy reliance on the Sharingan to anticipate enemy movement, even his taijutsu will be severely weakened.

Moreover, Sasuke, on the other hand, is a master of fire-style Jutsus, which would be a welcome addition to his arsenal. He’s also a skilled swordsman who can put his lightning technique to good use. Sasuke also has the ability to summon Garuda, a massive snake.

Unfortunately, even with these abilities, Sasuke would lose to Naruto without Kurama if he didn’t have Sharingan.

Naruto without Kurama vs. Sasuke without Rinnegan! 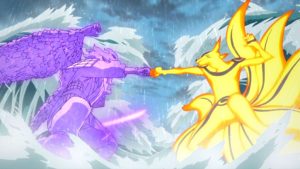 By the end of the series, Naruto had mastered Sage Mode and Kurama’s chakra. While Sasuke had the Mangekyo Sharingan and Rinnegan. But what if they kidnap Kurama and the Rinnegan Naruto still has access to the Six Paths Sage Mode and the chakra of all the tailed monsters even without Kurama. Sasuke, on the other hand, has his Mangekyou Sharingan, Susanoo, Amaterasu, and other abilities.

Unlike the previous scenario, Sasuke has a much better chance this time. Taking Kurama away is a big setback for Naruto, but the Rinnegan just enhances Sasuke’s natural abilities. This means that even if he doesn’t have it. He can use his Sharingan to access a wide range of abilities, including Amaterasu, Susanoo, and the Tsukuyomi.

While Naruto’s Sage Mode would provide him increased strength and endurance, he would lose the capacity to construct his signature ability, Rasengan, and other powerful techniques on the fly. However, Sasuke’s primary ability is Sharingan, not Rinnegan, therefore losing the latter will have less of an impact on him than losing Kurama will declaw Naruto.

While both sides will have a difficult time, Sasuke without Rinnegan will triumph against Naruto without Kurama.

This article is especially for anime lovers, and we have discussed all the aspects of How Strong is Naruto Without Kurama in Boruto. Keep reading us for other exciting articles. Goodbye!